After about a year of writing articles here at Break the Twitch, I started putting videos on YouTube as a way to share my thoughts in a different medium. I had been intimidated by video production, but within a month of my first upload, I went from being intimidated to totally obsessed. As I’m still early in my filmmaking journey, I’ve been continuously looking for ways to push myself to get better.

After spending some time on YouTube, I found filmmakers like Casey Neistat, who make a video every single day. The quality and consistency of Casey’s videos inspired me significantly, and while I thought the idea of daily uploads was crazy, it sounded fun to try. Almost a full year later, I decided to take on the daily video challenge. It was time to put my own advice of daily action into practice by doing a video every day for at least 30 days.

I had a few goals for the project:

Now that I’ve completed 30 days, here are the things that I’ve learned (or confirmed) by doing a daily video:

Shooting a video every day forced me to think about the things I do every day in a different light. If I filmed myself sitting at a coworking space doing work one day, I’d have to think of a new way to show the same thing the next time I did it. If I recorded the same thing in the same way on multiple days, it would make for pretty uninteresting videos. Sometimes I succeeded in creating something new, other times I might not have done great, but it absolutely forced me to see the world in ways that weren’t obvious.

When we do the same sorts of things every day, our brains eventually enter an auto-pilot mode to do them. These actions eventually become habitualized and we go about our day hardly processing the things that we do. If we can take opportunities to step back and assess the things we do from a different perspective, it gets easier to understand why we’re doing them. The more aware we become, the more we’re able to align our actions with values and live a little better each day.

Add some interesting to every day 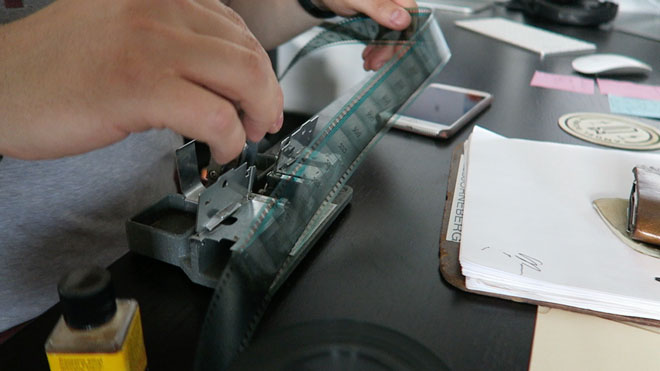 It hit me hard and fast after about a week of filming my activities: I spend a lot of time on the computer, and that sure doesn’t make for entertaining video footage. The thing is, you don’t have to skydive over the Grand Canyon to make your life more interesting.

If 4:00 P.M. rolled around and I hadn’t left the house yet, I’d get up and at least go for a walk to a nearby park. I’d try to find something fun to make that day’s video more interesting. You might say, “But Anthony, aren’t you just doing it for the video then?” and I’d say, “Well, sort of”. Despite the fact that I was doing it for the video initially, I was still getting out and doing it, it was real, and my life benefitted because of it. This resulted in a habit of going out to do more fun and interesting things on a daily basis and it felt great. So even though you might not be filming your life and uploading it to YouTube, see what you can do to add a little interesting to each day.

Focus on completion, rather than perfection

Every single night there would be this critical moment, where one of two things happened. Either, “It’s time to edit all of the footage from today!”, or, “Uh oh.” On a normal day, I’d have 15 – 25 clips on my memory card to edit into that day’s video. One day, I only had seven. Each day was a practice in taking what I had and trying to make something good out of it. It’s easy to get caught up in wishing we had more, not having the right things to get started, and procrastinating, but this challenge pushed me through all of that.

If I hadn’t started editing by 11 PM, I was going to up late.

There were nights when the clock would hit midnight, I’d be completely exhausted, and I’d just have to force myself to stay up and edit. Some days I edited to music, rather extensively, other days were barely patched together, but the video went up no matter what. It was an incredible lesson in just shipping work and getting it done even if it’s less perfect than I’d like. Work left uncompleted on a shelf helps no one, does nothing, and has little impact. Complete it, ship it.

Embrace the awkward and challenge discomfort

Since some of my earliest videos, I’ve felt uncomfortable walking around while holding up a camera and talking to it. The odd looks I’d get from people passing by have always made me uncomfortable, but did this ever help change that. Needing to record enough content to craft into a video at the end of each day meant recording in places that I could have previously avoided.

It’s been proven that exposure therapy helps us get over our fears, and this project provided a ton of that. While I’m not immune to wanting to avoid awkward situations, by the end of the 30 days, the discomfort largely went away. The truth is, people will look, they might even judge, and that’s okay. I got a lot of hilarious looks, like the one in the above image (which I only noticed once I started editing the clip) and it helped me realize that it wasn’t a big deal. I have no idea who that person from the Portland airport is, and we’ll probably never see each other again.

Life happens between the takes

Despite having a Canon G7X in my super cool belt holster for 30 days, I’d still completely forget to take it out when fun or interesting things happened. I’d be so in the moment that it wouldn’t even think to take out the camera and I’d miss filming something hilarious. There were times when something would happen and I’d think, “Oh man, that would have made an amazing segment on the vlog”, and then went on with my day. I realized that I wasn’t willing to sacrifice significant moments for the need to record them and even after several weeks of recording daily, I wasn’t consumed by it.

Even with the smartphones in our pockets, it can be really easy to instinctively whip out our camera phones and record some high quality vertical video of something that’s happening in front of us. The odds are, you’re never going to watch that video, and really, the memory will be just fine residing in our own heads. It’s nice to capture things, but don’t let it get in the way of living in the moment.

Real life isn’t perfect, and it’s okay to show it

Let’s just say, when you’re recording every day, it’s hard to always get ideal angles and show your best self. Doing this daily project help me let go of potentially not looking my best on camera, as it was simply difficult to do so. I believe in authenticity and sharing the journey along with the results, but it’s simply a lot easier to control how things look in a studio/home environment as opposed to walking down a city street holding a camera in front of you.

There’s a reason I don’t hyper-curate my videos, because I don’t want to create some fake image of what intentional living is supposed to look like. Minimalism and intentional living is about living well, mindfully, and doing what’s right for you. I hate the idea of creating some new standard to live up to, some feeling of lack simply because an online representation might look different than another person’s reality. It’s okay to put the truth out there, I tried, the world didn’t implode.

I was glad to be done, but I also miss it

At the end of the 30 days I was underslept, had close to 200 gigabytes of raw video files from the project, and couldn’t wait to ditch the camera on my hip. It was such a relief to not think about filming and getting the two hours per night back from what would have been my nightly editing. But there certainly were some tangible benefits to the intentionality that came from creating something every single day.

Will I do a daily video again? The answer is a firm: maybe. Right now, I’m ready to spend more time making stuff here at breakthetwitch.com and over on the Break the Twitch YouTube channel. The best part of a challenge like this is learning along the way and having time to appreciate the results, whatever they may be. If you’re interested in following along with any films I upload to my personal channel, you can check that out here. 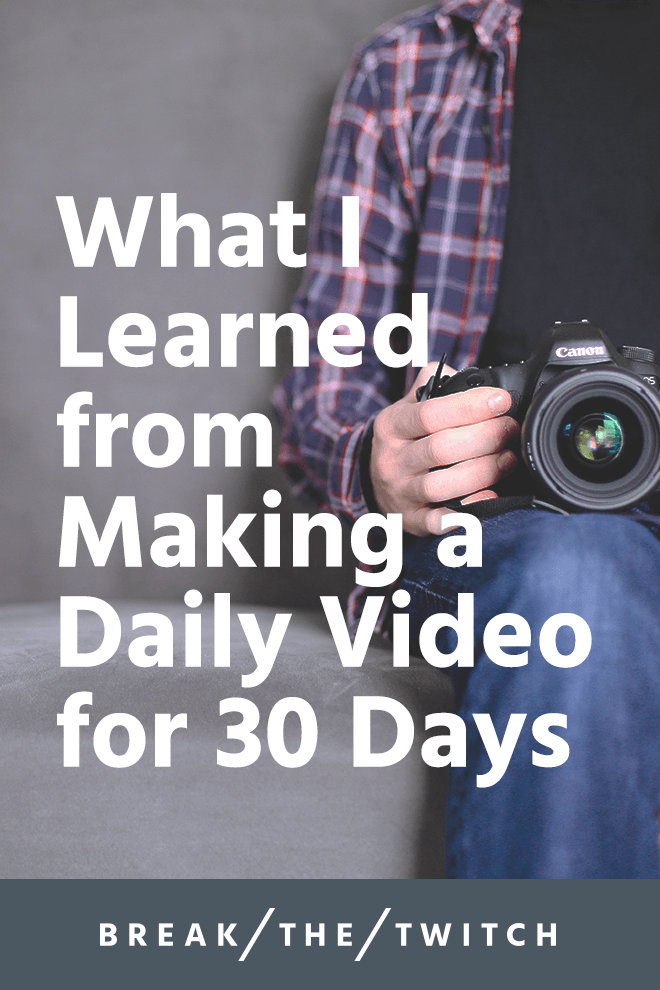