There is no doubt that social media has become a major part of modern life. And I can’t see that changing much in the near future.

Facebook usage continues to climb with the average user now spending upwards of 50 minutes per day on the site, yet more studies show that the more time we spend on Facebook, the less happy we are. So what exactly is going on here?

Are we just using social media wrong, or is it something that we should actively avoid?

Social Media Can Have An Immensely Negative Affect

Social media definitely has had a negative impact on my own life. We all know the impulsive addiction to checking social media feeds when you really have no reason to do so.

That’s the Twitch, and a large part of where Break the Twitch came from. It was the days I had the least energy and felt the worst overall were the ones I spent scrolling through social media feeds. Facebook provided a constant distraction from what I should be focusing on instead.

Social media can be just like a digital form of sugar. Sure it may feel good and it’s fun to eat, but you can’t live on it. Just like sugar, social media is made up of empty calories and isn’t intended to keep us healthy and well in the long-term.

Even so, I’d find it difficult to argue that these online social tools are inherently a bad thing.

A few years ago, I attended my friend Patrick’s (lovely) wedding. Before we met in person, we had exchanged some tweets back and forth and started following each other because of our shared love of biking. While we had been friends for quite a while at that point, there wasn’t a ton of social overlap in our circles. When Amy and I arrived at the event, we only found one other person we’d ever met before in person.

While I do believe in the power of a friendly introduction and simply getting to know new people from scratch, something incredible happened. It turned out that I knew about 30% of the people in attendance–from our conversations and exchanged quips on Twitter.

Sure, we didn’t know each other yet, but it was seriously magical to have already connected with a few of the people sitting around our banquet table. Our online exchanges had created a powerful catalyst to deepen our connection and kick off our conversation once we met in person.

Another case in point, you may be reading this article right now because you found it on Facebook, Pinterest, or perhaps Twitter. You and I are connected right now in a way that we might not be otherwise. If you leave a comment, send me an email, or connect on social media, perhaps we’ll one day be at the same event together and we’ll get to talk about intentional living and how your life changed after decluttering your home. For me, that’s the entire point of social media–creating real connections through digital ones.

It turns out, social media really is a powerful tool to create meaningful connections, we just have to use it properly. Just like a hammer, you can use it to build something beautiful or whack someone over the head with it. It isn’t inherently good or evil, it just is.

I’d consider social media to be something like a protein supplement. Sure, it feels good to take and might help you recover from your workout faster, but it was never designed to replace working out in the first place. One without the other is wasting money and time on what I’d consider a false first step–looking for a solution without doing the actual work.

So that means that it’s up to us to determine how we want to use that tool in our lives to make it better and not worse.

Here’s What You Can Do To Make A Change

The best part about this is that you have the power to decide how you want this to be a part of your life. But no one is going to make that decision for you–you get to choose whether it’s personally a good thing or a bad thing for you.

Break the Twitch by taking a literal break.

The most effective way to un-addict yourself is to take at least a seven-day sabbatical from social media. It may feel uncomfortable at first, but if you push through the first few days you’ll see how incredibly freeing it is. Sure, things will be happening online but do you wake up every morning to make sure the sun comes up? Would it not if you weren’t there to ensure it? No. It’ll still do its thing and you can still do yours.

This study (PDF download) from the Happiness Research Institute found that after one week without Facebook, the participants reported a significantly higher level of life satisfaction. At that point, you will have less addiction and more clarity in how you want social media to be a part of your life going forward.

If the extent of your dialogue is double-tapping a photo to leave a like on it, it’s a nice thing to do, but it simply does not build or strengthen relationships on its own. Pick up the phone and call, meet up with a friend for coffee, or reach out to someone online and engage in dialogue. Even if it’s over Skype, it still means so much more than a quick thumbs up alone.

While it can feel validating to be on the receiving end of likes, it simply doesn’t provide the dialogue we need in our lives. It’s still just a quick sugary dopamine burst, when we need some hearty steamed veggies.

When you’re actually with people, put away your phone.

I don’t mean set it on the table, either. I mean visibly, audibly, away. If you’re spending your time on social media at home then still cracked-out on your phone when you’re with a group of good friends, you’re undercutting the real relationship-building that’s happening there.

Life is short and you never know when you’re going to see those people again. One of the most meaningful things you can give someone is your full attention–it’s such a rarity in today’s culture. Imagine what it might be like to have the same from the people you care about as well.

If you found this post helpful, you’d probably find 60 Days Without Social Media and Observations from Tracking Smartphone Use interesting as well. Perhaps you’d like to receive my monthly newsletter, yes? Well, in that case, enjoy!

Reduce distractions and create some much needed space in your digital life with this free 7-day email course from Break the Twitch.

Success! You're in. Now just check your email for the confirmation link and you're all set. 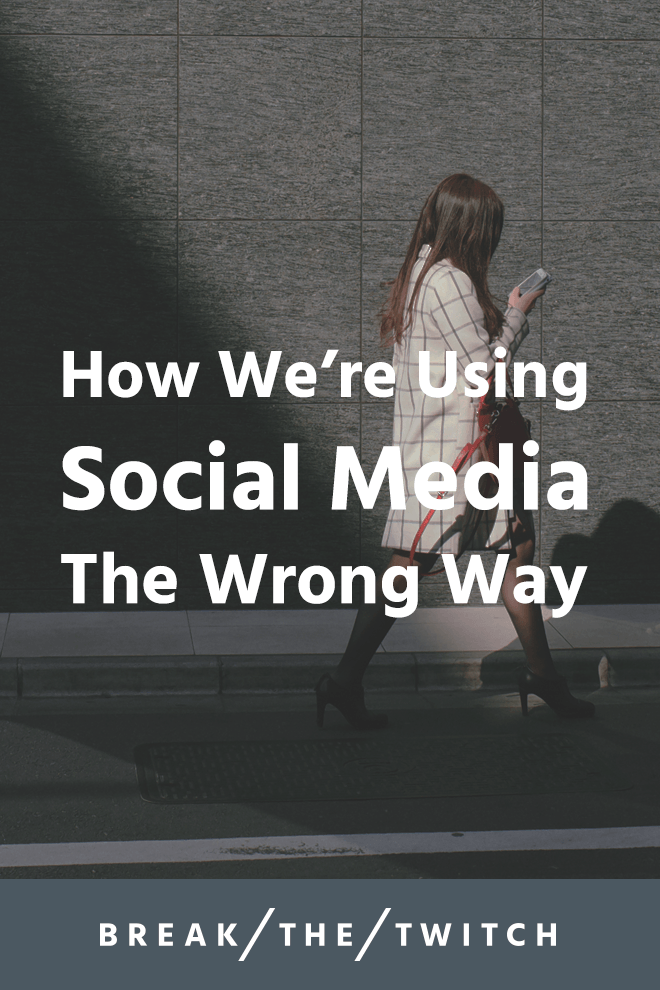