There’s a major disconnect between what we say we want in our daily routine, and how we’re actually spending our time.

And for me, the origins of this daily routine disconnect started more than a decade ago.

In the spring of 2004, I was a second semester freshman at Eastern Michigan University living in the on-campus dorms. Perhaps my first brush with minimalist living, I shared a 160 square foot room with my friend (and roommate) Sean while sharing a bathroom with the suite next to ours. It wasn’t glamorous, but when we ran out of breakfast cereal, it certainly made it easy to see if the neighbors had any.

More importantly, a few months earlier a guy named Mark Zuckerberg launched this thing called The Facebook and people were pretty excited about it. When The Facebook launched, it wasn’t available to anyone and everyone; it started at Harvard University, then slowly expanded to the Ivy Leagues, then other prestigious schools. My girlfriend at the time attended a more prestigious school than I, about 20 minutes away. I remember receiving the text message saying she had signed up, and all her other friends were already on it as well.

I had to wait a few weeks before my university was available for registration. When it was finally available, I created my account on The Facebook in the spring of 2007. It was exhilarating; it felt like I had finally got into what, at the time, felt like an exclusive club for cool kids.

Exploring the network and connecting with people through the site became part of my daily routine.

The profiles that people filled out were largely creative, interesting, and allowed me to find folks that I eventually ended up hanging out with throughout college. For all intents and purposes, it was an amazing tool for connecting people in really compelling ways.

Here’s a fun montage of my profile pictures over the last decade; you can see me aging, perhaps mostly in the transition of hair away from my hairline and down to my beard.

Over the following eleven years, The Facebook dropped “The” and grew substantially. Everyone soon had access to the network—not just college students. My peers were particularly upset at that fact, but it was inevitable, of course.

Soon we had status updates and the witty, attention grabbing updates that were always fun and interesting to read. Then the newsfeed came along, which everyone hated at the time, and Facebook slowly became the behemoth we know it to be today.

All of this to say, I’ve been on Facebook and other social media sites for a very long time, nearly since the beginning of Facebook itself.

And I think it’s nearing time that I, at least personally, exit them.

Is The Social Media Twitch Meant To Be Broken?

Since starting Break the Twitch in 2014, I’ve been exploring what it means to live intentionally. After a few years, I’ve come up with the framework of minimizing distractions, building habits, and creating things we care about as the way to actually accomplish this (hence the Break the Twitch core principles of minimalism, habits and creativity).

Thinking about the role social media plays in my life and where in the framework it fits, I had difficulty not putting it in the “minimize distractions” category—as in, a distraction to be minimized.

Last year, I read a book called Hooked—about the different psychological triggers and habit-forming techniques app creators and entrepreneurs use to get consumers “hooked” on their products.

At the core of it, just about every aspect of the social media experience was designed from the ground up to “increase engagement” and incite addiction. This is part of what I went on to give my TEDx talk about.

I’ve written about doing social media and digital detoxes, and have done several myself throughout this time. A few for 30 days periods, two 60 day periods, and at least one 90 day experiment that involved removing all social media from my phone, deactivating accounts and blocking sites in my internet browser.

Every time I would complete one of these social media detoxes, my life would get objectively better.

The desire to Twitch and check random things on my phone subdued significantly, and then completely during these periods. After the first week or so I found myself participating actively in the idle moments of everyday life. I would text my friends and family more often, randomly think of people I hadn’t spoken to in quite a while, and reach out to them directly. This was a stark contrast to spending most idle moments filled with browsing, “engaging,” and trying to come up with interesting things to share that people might like.

Feeling more “social” wasn’t the only thing that happened during these breaks I took from social media.

Not only did my productivity (both in work AND rest) skyrocket, but I found that I would generally get less overwhelmed during the day, felt more confident about myself, and did more things that actually brought me longer-term contentment. Things like reading blog articles from fellow writers, reading books, walking outside, and other things that were far more meaningful than a bunch of Instagram likes.

So, does anyone actually want this?

Here’s the thing, Amy and I did some math to figure this out. If you are in your early 30’s, and you spend about two hours on social media every single day, then you will have spent six waking years of your life on social media. That’s generally more time than anyone spends eating, grooming, exercising or socializing on any given day.

I realize that many people work on social media in various marketing roles all day long. But even when looking at time spent outside of those types of jobs, we do need to ask ourselves if we really want to spend, in total, years of our lives doing this.

Based on my own experience and the experiences other people share when I ask what an ideal day might look like, there’s been a consistent and interesting result. I almost never see anyone write “check social media” as a part of a day they could design completely to their liking. Instead, they detail things like spending time with friends, family, traveling, reading more, going on hikes, cooking, creating, or napping.

No one mentions social media as part of their ideal day

For me, this solidly falls into the category of my favorite Annie Dillard quote, “How we spend our days is, of course, how we spend our lives.” Each of these moments combine over the years to effectively become what we spend our lives doing, which is made evident by how the two hours per day end up equaling six years in a lifetime.

One of the first things friends tend to ask me when I tell them I’ve considered removing my personal profiles from social media is this: “But, doesn’t your livelihood depend on social media? You’re a blogger and a YouTuber.” It’s true. And for a long time I’ve felt that my work depended highly on an active social media presence.

But from my experience of substantially increased productivity during the various social media detoxes I’ve done, my thinking has drastically shifted.

My definition of work has changed

After reading books like Deep Work, which makes a convincing argument that creators and knowledge workers shouldn’t be spending their time trying to figure out what to tweet, I can’t help but think that my job here isn’t to actively engage on social media.

My job here at Break the Twitch is to share the most helpful, impactful, and life-changing information possible.

In my opinion, that is the best way that I can help you minimize distractions in your own life and do more of what matters to you every single day. That means doing the deep work and diving into what it means to live intentionally, how we can Break the Twitch in different areas of our lives, and in the end, live better for ourselves and others.

I simply cannot do my best work (as I experienced while writing my book) when I myself am distracted—spending fractured time throughout the day trying to keep up with social media.

Even within the context of our production company clients, the same is true. My job is to make the most creative, effective, and interesting videos to solve the needs of organizations and entrepreneurs. My ability to do that at the peak of my abilities diminishes when I’m aimlessly browsing and keeping up with social media.

The further I dive into creative work, the more I think social media is a distractor—not only for me, but likely for most of us.

Given the above information, you’d think that I’d choose to not use social media anymore—to step away completely. It seems like it would be the right thing to do, right?

Instead, I’d tell myself I could integrate social media in a balanced way back in my life after each social media detox. Then over the following months, the habit slowly creeps back.  Then the in-between moments of life start filling with picture posts, likes, and feed scrolling.

So why have I always kept coming back?

There’s probably some fear involved, that’s for sure.

I’ve been on Facebook since I was a freshman in college, and I’m now 32 years old. I’ve basically used it for all of my adult life. In addition to that, there’s a small part of me that wonders how it may affect my work here. After all, two of my biggest referrers of traffic to this site are Facebook and Pinterest.

A small part of me also fears not being “found” through my personal social media accounts.

As a recent example, I made an amazing connection through Instagram with my high school friend Mollie (who is doing some pretty incredible things right now) while I was in Anchorage, Alaska on a film shoot. She saw that I was in Alaska from an Instagram post and reached out. We met up for coffee during my 10-hour layover there, and it was great to catch up. I fear missing out on connections like this if I minimize my social media presence. 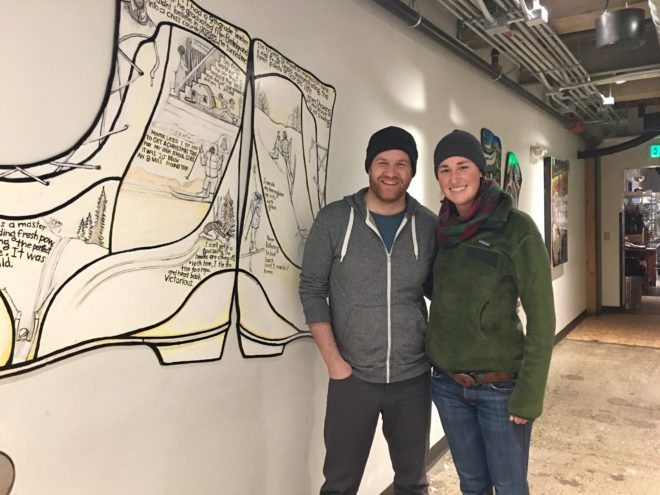 Social media is simply a tool, but is it doing the right job?

When I look at the different social media networks, I see them as tools. While designed to be addicting, social media is only a tool—just like a hammer. If you don’t have any nails to pound, perhaps the hammer stays away in its drawer.

I’m grateful for the connections that I’ve made through Facebook, Instagram, Twitter, and other networks. I’ve never managed to get a job through LinkedIn, but I found my last full-time job on Twitter. Either way, I’m beginning to view active participation on social media networks as less of something to be managed, and more of something to be minimized or potentially removed. If it’s distracting you from doing more of what matters, how could we not?

Where do you stand on this?

Have you experienced this daily routine disconnect? I’m curious if this resonates with you, and if you’ve exited (or tried exiting) social media completely. If so, what were the results? I’d love to hear from you in the comments below, or over on YouTube where I’ll be responding to both.