In December of 2014, my wife and I removed 992 items from our home. It started with a discussion over a fresh cup of french press at a friend’s place.

Before dropping my laptop, notebook and pen on to its surface, the dining room table had been completely clear. So were the countertops—other than the water filter, blender and a few of the other kitchen normalities. I couldn’t pinpoint exactly what it was, but it felt different being there. The overwhelming sensory input that comes with the all so common household clutter didn’t happen.

Instead, the view was relaxing.

Noting my admiration, my friend Jeff said, “You should try minsgame”.

Minsgame is short for the ‘Minimalist Game‘, created by The Minimalists, aka Joshua Fields Millburn and Ryan Nicodemus.

The idea of the game is to reduce your possessions over the course of a month, starting with one item on the first, two things on the second, and so on until you’re getting rid of 31 things on the last day of the month. Amy and I decided to participate in the game for the month of December, which meant that we’d each be choosing 496 individual items to sell, donate, recycle, or throw away.

Now that we’ve completed the adventure successfully, here are some of our thoughts.

It started out very easy, finding a single item in the house that I didn’t want anymore. An old Halloween costume hat, left unused for several years but somehow still had made its way through several moves. It continued to be fairly easy until December 11th, when I was looking for 11 things.

For more ideas on intentional living and minimalism, you’ll find actionable and practical strategies in my latest book Break the Twitch.

In my mind I knew that we each had more than 496 items that we could let go of, but it became hard to identify exactly what the selected items should be that day.  I found that I tend to work much better in bursts where I’d identify a large number of items at a time and then take a break for a day or two. Amy on the other hand, was able to put in the consistent effort of finding an appropriate number of items every day during the challenge. Either way, the end result was the same – a total of 992 items left our house by December 31st.

The major benefit to participating in minsgame is that it slowly but surely eases you into the process of finding the things you’re willing to let go of.

It starts very easy and escalates to the point where at the end of the month, you’ve made a major dent in reducing clutter in your home. If you’re someone who likes to work in bursts, I’d highly recommend taking advantage of those moments and getting it done with that energy. Once you’ve identified the need to reduce some clutter, use whatever strategy works for you to accomplish your goals.

We’ve found that the feeling of donating usable, good condition items is far more rewarding than simply having it sitting around unused. It’s also been an incredible change in seeing how freeing it can be to remove the things that get in the way. Reducing the clutter reduces the time needed to maintain and accomplish that which you aim to do.

So what do you think? Is it worth giving minsgame a try? I do. 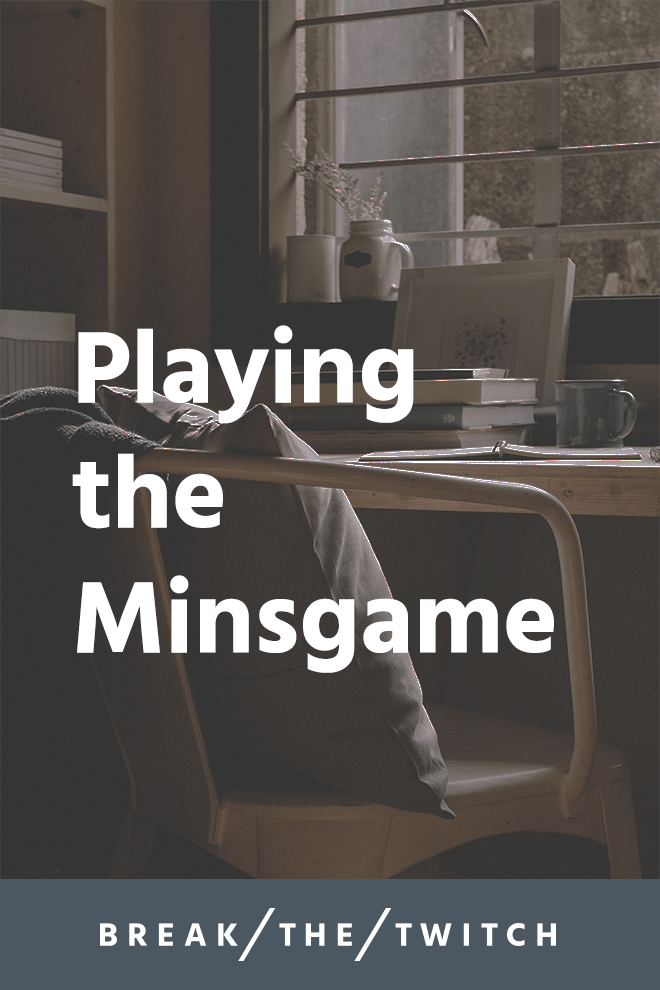